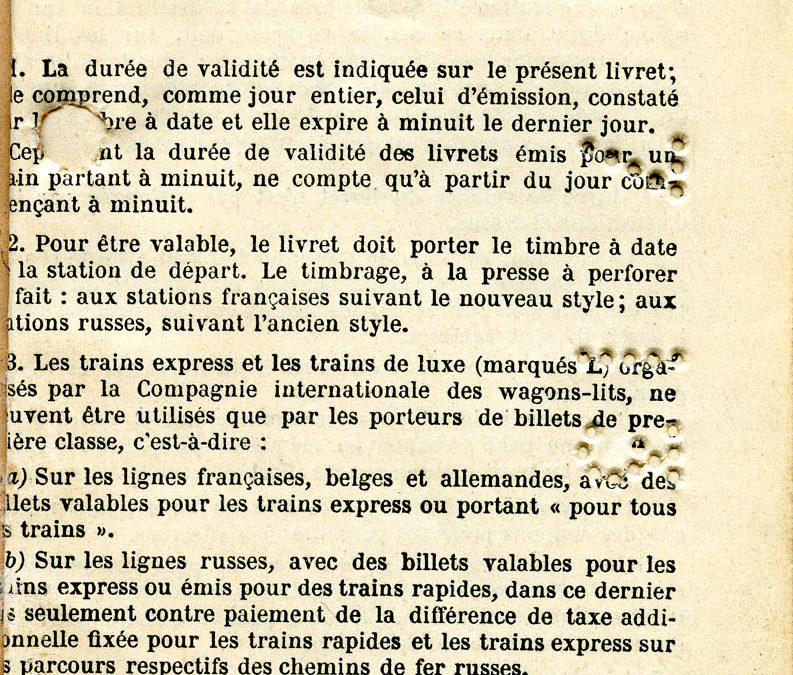 [The handwriting appears to be Polya’s, and it is an indication of her birthday. It is erroneously written as April 31, 1893. April has only 30 days — even in Russia. She celebrated her birthday on April 30. However, she said that she was really born in November, 1893, but was registered in Kishinev — as a Jew — on April 30, 1894. Speculation is that she was asked her date of birth and was nervous. — JM]

Extract Of the Transport Conditions

1. The duration of validity is indicated on the ticket and includes the entire time from date of emission and it expires at midnight on the last day.

3. The Express trains and the pullman-car expresses (luxury trains) (Marked L) organized by the International Company of sleeping cars, cannot be utilized except by the carriers of first class tickets, i.e.:

a) On the French, Belgian and German lines, with valid tickets for express trains or bearing “for all the trains”.

c) Outside the taxes for the tickets indicate under a) and b), there is payment, in favor of the Company, a fixed supplement for a special tariff.

4. The traveler can stop at the end stations and at the stations indicated on each ticket. Independently of these stops, the traveler can interrupt the trip on the French, German and Russian lines…

at any other station they have; but, in this last case, on the non-German courses, it is necessary to give the booklet to the station master when exiting from the train. If one omits to achieve this formality, the ticket loses its validity from that station on or the traveler descends just at the station from the stop indicated on the ticket.

During a stop, the voyage little to be continuous also, starting from another station situated more closely to the destination on the same line. In this case, the traveller must, on the Russian lines, to present his booklet to the counter, at the latest 10 minutes before the departure of the train, to indicate there the number of the train and the date of the continuation of the voyage. The duration of the stops is not limited to travels of the booklet. The duration of validity of the booklet is not prolonged by the provisions above.

5. The traveler is obliged to present the booklet to any requirement of the guard and the agents in charge of the control of the train. Coupons are issued by agents on the routes for which they are valid.

The coupon cannot be removed from the booklet by the traveler. Any single coupon is considered void and withdraws if the traveler can not present at the same time the other coupons for the course not yet made, with the cover.

6. The traveler must ensure that the agents only repeat coupons for journeys already made.

If he is mistakenly withdrawing coupons for journeys remaining to be made, the traveler must immediately claim them and report the fact to the chief of the first stop or stop station indicated on the coupon.

9. Luggage registration is done on presentation of booklet.

The traveler is required to attend in person the donation of his baggage. Administraionts assume no responsibility for the traveler’s failure to comply with this requirement.

Customs clearance is as follows:

By the Belgian customs:

By the German customs:

By the Russian customs:

If he arrives at the frontier stations of Wirballen, Alexandrowo, Kalisch, or Sosnowice, baggage entered directly for a city in the interior of Russia, where there is a customs office and the owner does not present himself for the checks, the baggage is sent immediately to the customs office of this locality.

By the German customs:

By the Belgian customs:

By the French customs:

10. For the rest, the carriage of passengers and their baggage shall be done in accordance with the legal provisions on the matter which apply to the network of each administration participating in the transport. 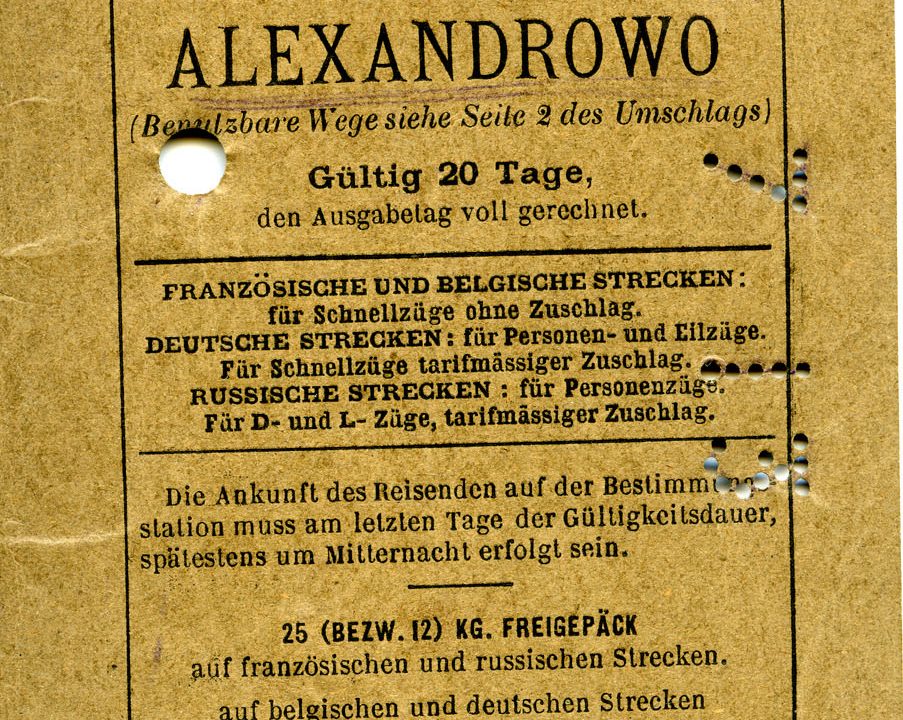 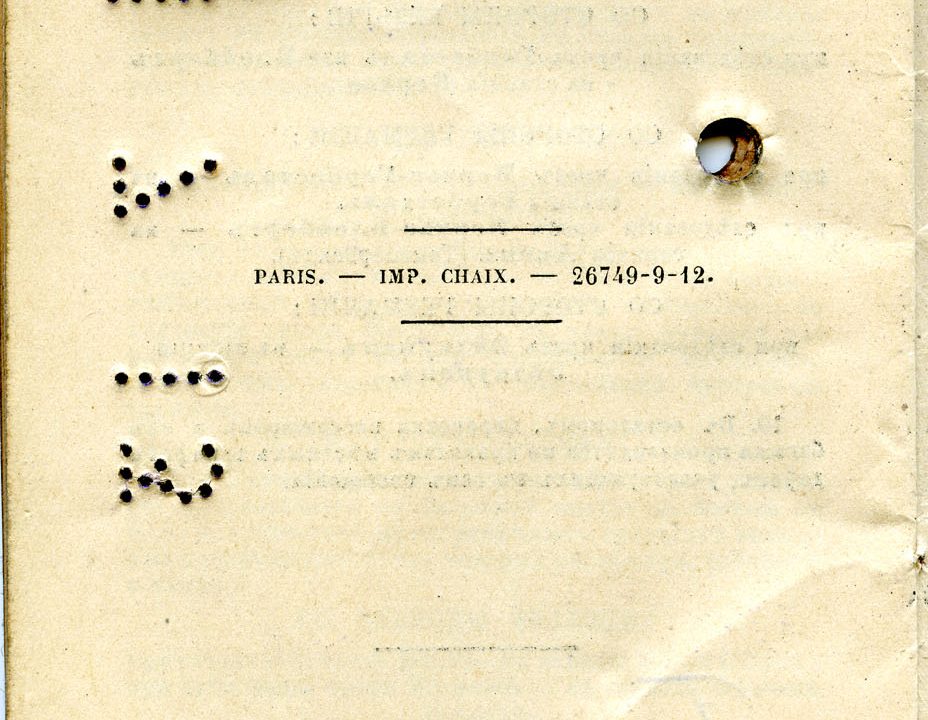 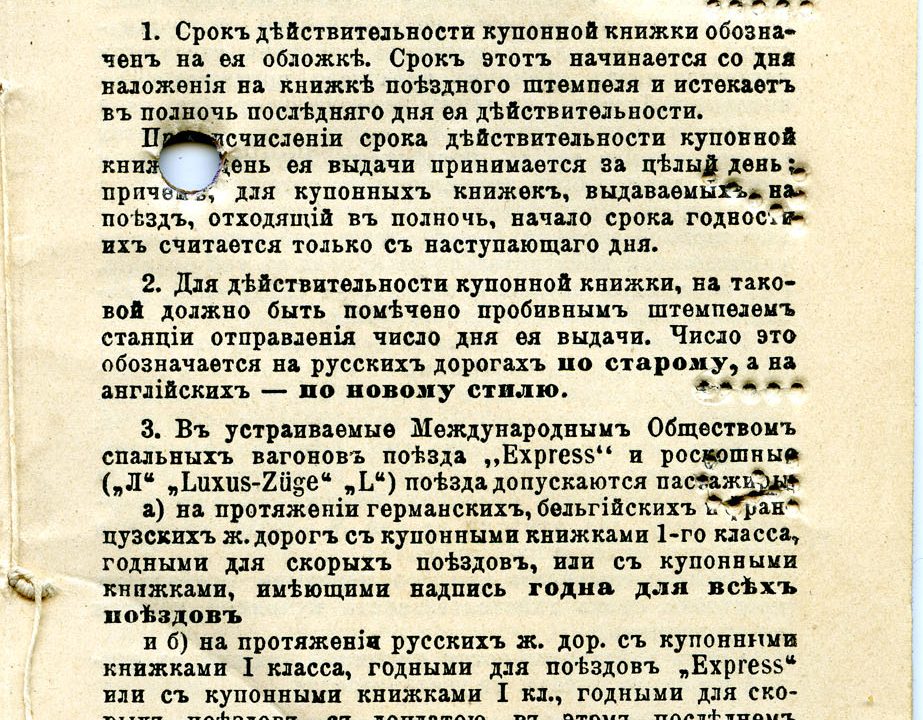