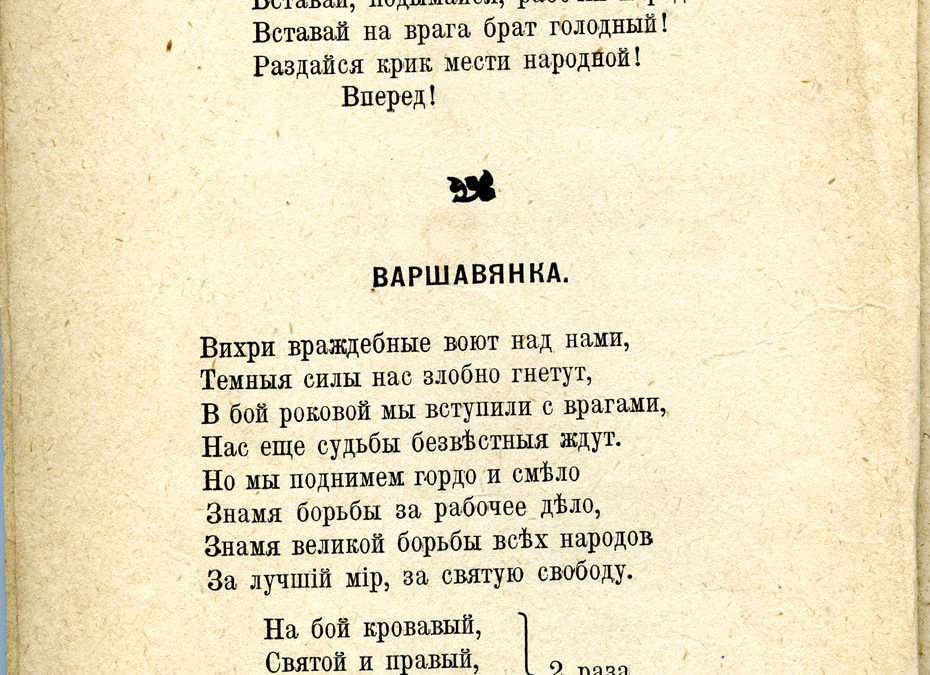 The song “Varshavyanka” was originally a Polish socialist revolutionary song, written some time between  1879 to 1883.  It was an anthem for protesting workers during the Revolution in the Kingdom of Poland (that is, 1905-1907), which was ignited when 30 workers were shot during the May Day demonstrations in Warsaw in 1905. Over the next several years, it became popular in Russian-held Poland — and found its way into Aron’s book of Labor Songs.  Józef Pławiński wrote the music; the lyrics areby Waclaw Święcicki.

The Russian version has somewhat altered lyrics, which do not mention Warsaw. The Russian text is attributed to Gleb Krzhizhanovksy and was written in 1897. ( Krzhizhanovksy became involved in Marxist circles in 1891 and was a friend  and associate of Vladimir Lenin. Krzhizhanovksy ultimately became a Soviet Scientist and state figure.) “Varshavyanka” was a popular anthem for the Russian socialist revolutionaries as well.

The enemy whirlwinds are flying over our heads
Dark forces are oppressing us
In the battle that we were destined for
Unknown fates are awaiting us.
But we will proudly and boldly raise
The banner of the workers’ struggle
The banner of the great battle of all the peoples
For a better world and the holy freedom.

Must the worker still starve nowadays?
Brothers, shall we keep silent?
Can the sight of the gallows
Frighten the young eyes of our brothers at arms?
In the great battle don’t let us die without leaving a trace behind
Those who have fallen in honor for an idea
Their names in our victory songs
Shall become sacred to millions of people.

We loathe the tyrants’ crowns
We deem that chains turn the people into a martyr
The thrones are covered with the blood of the peoples
In their own blown we shall redden our enemies.
A ferocious death is awaiting all the enemies
All the parasites of the working classes
Vengeance and death for all the plutocratic tsars
The solemn hour of victory is near. 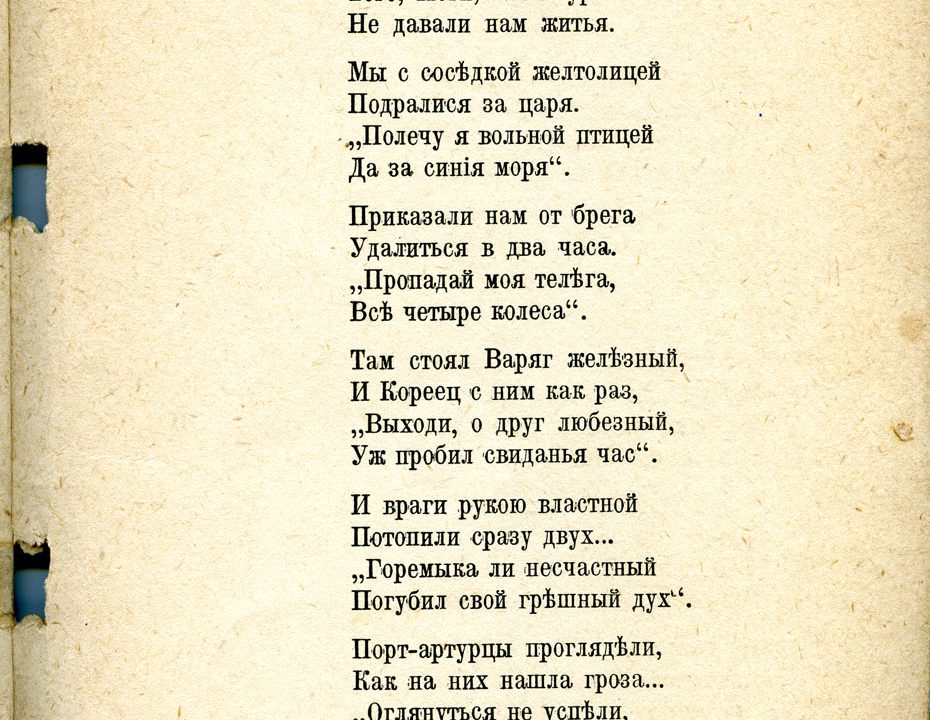 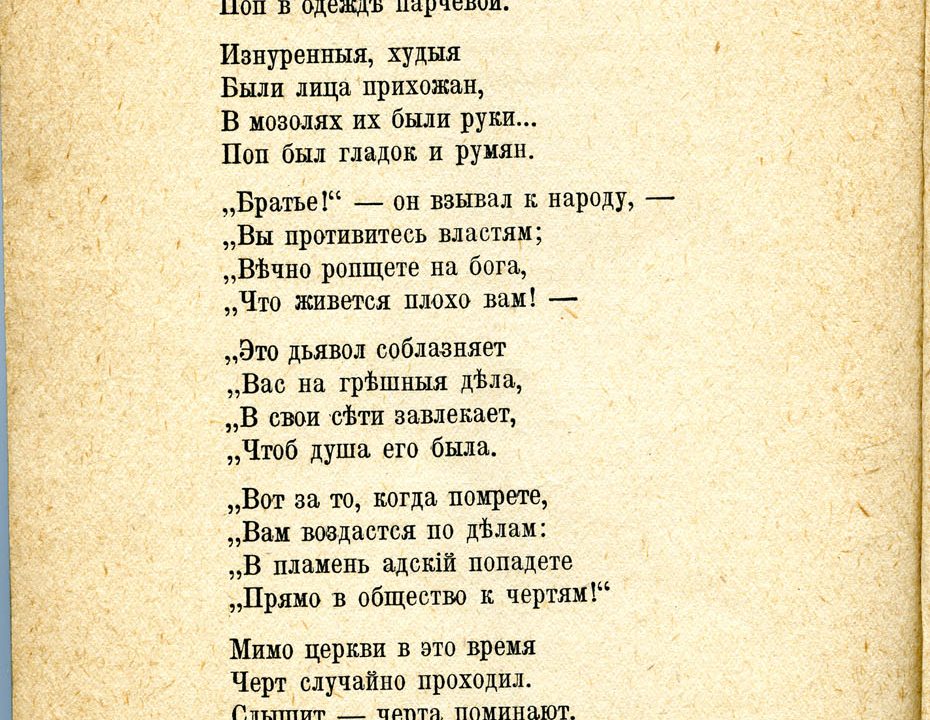 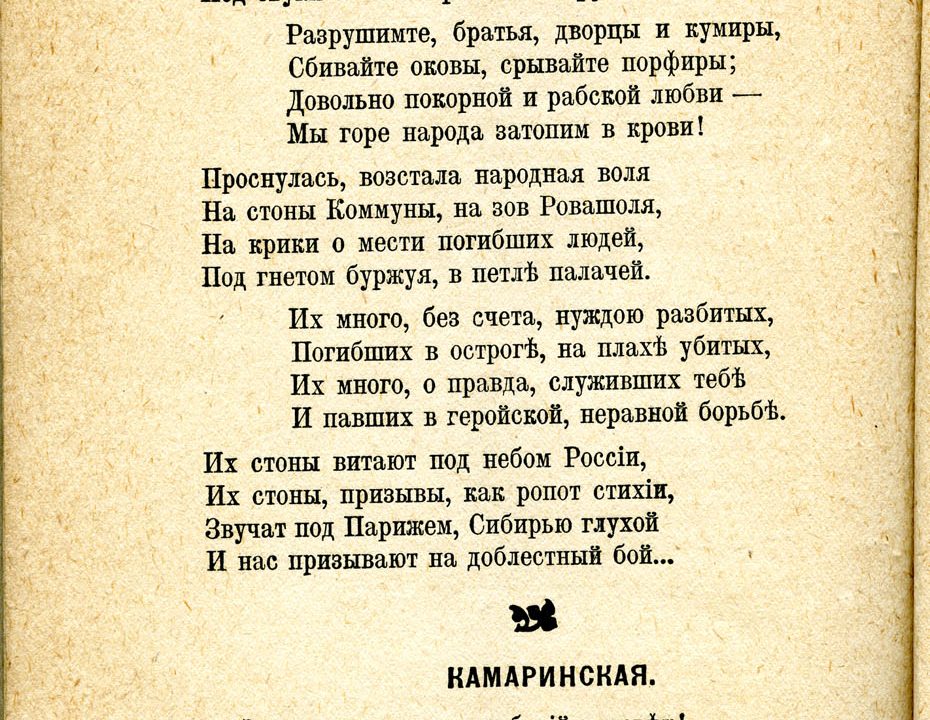