A Portrait of Mrs. Siddons as The Tragic Muse 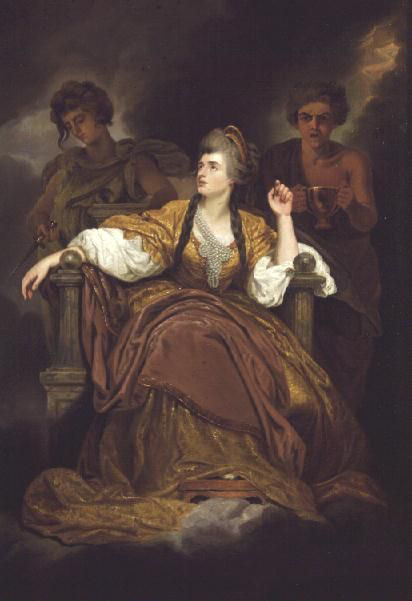 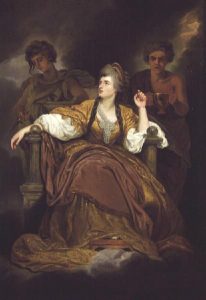 Grandmothers can have long lives before we know them. And mine was around sixty when I first came into the world. Now, I say around sixty because although we celebrated Polya’s birthday on April 30th every year, she claimed that she actually had been born in November of the previous year. “It was so cold in Russia,” she would say, “they didn’t register my birth until the end of April.” (There was, perhaps, a delay to register the birth, but the reason may not have  been the weather. Kishinev has a continental climate with dry hot summers and windy winters where the temperature rarely dips below zero. Her parents had to register her as a Jew, with the lack of privileges that entailed, so that might account for the difference.) Hence, she was born in 1893 or 1894.

While going through the dreaded basement of my father’s house, my brother found the carefully wrapped package of our grandmother favorite print, a lithograph of Sir Joshua Reynolds’ A Portrait of Mrs. Siddons as The Tragic Muse. The Welsh actress Sarah Siddons, known for her portrayals of Portia and Lady Macbeth, posed in 1784 in voluminous brown silks, braided hair, and coiled pearls, sitting in what is called the grand chair. (This painting appeared in the 1950 film All About Eve. The evil Eve, played by Ann Baxter, after plenty of conniving and backstabbing receives the coveted Sarah Siddons Society award for her acting, which is a statuette of Sarah Siddons in her grand chair.) The painting has beautiful browns and golds, but my grandmother’s lithograph was black and white, which makes it appear less luxurious and more sinister. 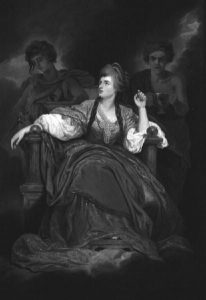 The print always reminded me of my grandmother in one of her dark moods, life imitating art, propped up by large pillows on her divan (not a couch or sofa, she called it a divan) in a darkened room. Perhaps she was only trying to control the dizziness from her high blood pressure. Perhaps it was a form of Russian melancholy. I don’t know. The Venetian blinds were drawn and she placed a cold compress (a wet dish towel) on her forehead. I learned from my mother that Polya’s dark moods were  because of breast cancer and a long, coiled strand of sorrows. There were the pogroms and the flight from Kishinev to Paris. In her late teens, my grandmother lost her mother, and, as the oldest child and daughter, she helped her father care for the four younger siblings. And then the journey and adjustment to America. Polya lost Aron in 1940 and never remarried.

My brother and I often had our breakfast of toast and eggs at Polya’s dining table, as we lived in her two-family home; she took care of us while both our parents worked. Above the table, above the bowl of wax fruit, as though she were a member of the family, there before us sat Sarah Siddons flanked by the shadowy figures of Pity holding a dagger and Terror holding a chalice of poison. Sarah Siddons as Melpomene, the tragic muse, singer of melancholy melodies of twists and turns and of those driven time and again off course.

Eventually, the lithograph traveled from New York to me in California. The original, by the way, hangs not far away in San Marino, California, at the Huntington Museum. I visit it occasionally. Polya’s lithograph of the tragic muse hangs beside my desk. 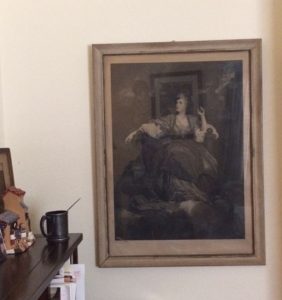